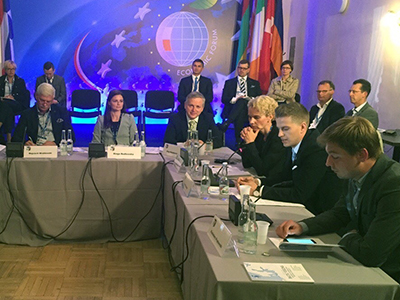 In the period of September 8 - 10, XXV Economic Forum under the motto "Towards a resilient Europe. Strategies for the future” was held in the Polish town of Krynica-Zdroj.

Having more than 20 year history Economic Forum in Krynica is the largest and most important meeting of representatives of political and business circles in Central and Eastern Europe with a mission to create a favorable climate for development of political and economic cooperation.

The XXV Forum, organized by the Institute for Eastern Studies (Warsaw), was attended by more than 3,000 guests - leaders of political, economic and social life of Europe, Asia and America.

The meetings of the Forum were prepared in collaboration with more than 100 business partners, among them - the largest companies in their respective industries.

In frame of the Forum around 180 events - debates, plenary sessions, thematic blocks, workshops and presentations of reports – were carried out on 12 thematic blocks dedicated, in particular, to macroeconomics, energy, business and administration, a new economy, health care, innovation.

At the invitation of the organizers of the Forum the event was attended by President of the Foundation of Knowledge and Technology for Small and Medium Enterprises "Victoria" Oleg Matukevich.

It is worth noting that the Foundation Victoria has already taken part in this representative and iconic event. At this time, Oleg Matukevich made a presentation: "Cross-Border Cooperation: Challenges and Opportunities".

Based on carried out by the Foundation Victoria’s study and analysis of the three-year experience in the local border traffic (LBT) between Russia (Kaliningrad region) and Poland Oleg Matukevich showed a positive impact of the simplified regime of crossing the Russian-Polish border on the development of socio-economic and cultural relations between the border regions .

In particular, he cited figures showing a sharp rise in border crossings between the two countries, as well as an intensive socio-economic development of the border areas, where new discounts appeared and cultural events with the participation of the Russians were held due to implementation the Russian-Polish LBT regime.

LBT regime also prompted cooperation of the Russian and Polish municipalities of border areas in cultural, humanitarian and social spheres.

Along with positive assessments of the results of LBT regime being in action, Oleg Matukevich dwelt on some problems in the visa-free border crossing between the two countries.

In particular, the situation at the border crossing points both the Russian and Polish experts called the "bottleneck" of the project.

Russia’s representative office of the Ministry of Foreign Affairs in Kaliningrad was cited as pointing out several constraints to LBT regime. Among them there is a lack of well-developed tourist and recreational infrastructure in the Kaliningrad region able to attract more tourists, as well as unwillingness of the European officials to extend LBT regime to Elk city in Warmia-Mazury in Poland and to the waters of the Vistula Lagoon.

In general, Oleg Matukevich underlined that despite the existing problems in the implementation of LBT regime between Poland and Russia, both sides concurred: - the mechanism of visa-free local border traffic, launched in July 2012 under the Agreement between the Government of the Russian Federation and the Government of the Republic of Poland showed its worth and needs further development.

Moreover, the effect of a visa-free regime of crossing the Russian-Polish border provides a unique European experience of cross-border cooperation between Russia and the countries of the Schengen zone.

According to Oleg Matukevich, ability of LBT regime to create conditions for public diplomacy is of particular importance. Under conditions of the complicated current political situation on the European continent, Russian and Polish residents of the border areas have an excellent opportunity to get to know each other better, throwing away glasses of political disagreements and ideological cliche mass-media of both countries abounds in.

An important result of work of the XXV Economic Forum has become an edition of collection of the reports, where an article by President of the Foundation Victoria Oleg Matukevich can be found.